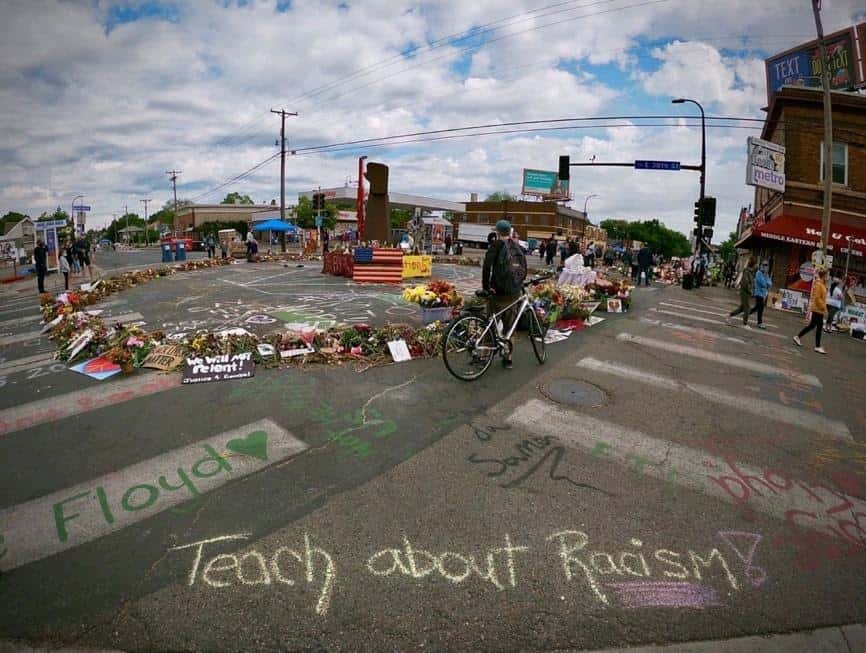 Now Is the Time to Teach About Racism: Cleveland Humanities Magnet High School

By now, even young children have witnessed the brutal death of George Floyd, gasping, with his neck locked under the knee of a white police officer. As neighborhoods across the country went up in flames, children became part of – and now share – a history with America’s violent past and present – where hatred and deep-seated racism continues to suppress, crush and kill Black Americans.

How do you answer a child who asks, “Why did the police kill that man?” What can teachers and administrators do when a student opens an email and finds an image of a person hanging from a noose and a racial epithet aimed at her? Will teachers, counselors and administrators move this teachable moment into the classroom?

Jennifer Macon, an 11th grade teacher and magnet coordinator at Cleveland Humanities Magnet High School in Los Angeles, talks about their innovative year-long 11th grade program, Reimagining What’s Possible, that seeks to question, study, and mutually discover the possibilities for greater social responsibility that will allow us “to form a more perfect union.” The program uses a writing-based, interdisciplinary approach to learning. Classes are team-taught in history, philosophy, art, and literature.

Macon explains, “The theme that we use is racial literacy. We’re looking at the establishment of a nation–that is establishing a democracy while practicing slavery and native genocide and while grappling with the contradictions of a nation so founded in its ideals (all men are created equal) but practicing the very opposite of its stated ideals.”

Students (known as Corebabies), investigate and explore the history and evolution of race relations in the United States, highlighting the multi-racial, multi-faceted perspectives of White people and People of Color, including African Americans, Asians, Latinos, South Asians, Middle Easterners, Arabs and Bi/Multi-Racial individuals. Ms. Macon continues, “We isolate race. We look at systems of oppression and look at the ways slavery established a relationship between black folks and the country.”

Students analyze how the ideology of white supremacy has influenced racial inequality and shaped social and individual identity, while engaging in honest and direct cross-cultural dialogue with the goal of discovering possibilities to counteract racial injustice. Essays are the foundation of this program and every 10 weeks students write a two-hour in-class essay that combines material from all of their Core classes.

Macon says, “So we talk about racial identity for white students, we talk about racial identity for students of color, and then we go through a series of workshops (all of our units are broken down by workshops) looking at what we call racial realities.” In the past few weeks, she has received a lot of messages. “Especially right now, we’ve gotten s-o-o-o many emails from former students — it’s just like, ‘Thank you’ and ‘I see it now’ and ‘I didn’t appreciate it then — I appreciate it now.’ ”

Daniel Eyal, a 2012 graduate and former Obama White House intern, says, “As an alumnus of the Cleveland Humanities Magnet, CORE 11’s in-depth curriculum on race in the United States remains one of the most foundational experiences of my educational life. Immersing myself in a community of diverse, engaged and inspired students, I thought critically about how racist ideologies – from the seeds of American colonialism to our current national conversation on race and policing – have informed and shaped our norms, laws and institutions. Above all, I gained a sense of agency that I can work to dismantle these ideologies and make life better for more people. I am incredibly thankful to my teachers and CORE community for investing in me, and I am dedicated to continue this important work.”

Jennifer Macon concludes, “On the one hand, teachers have so much power in our classrooms. And on the other hand, the ways in which we deprioritize education…makes us feel that we have little power, but I think that the opportunity of this moment is probably going to be won by teachers who have the courage to push through their fear and have courageous conversations with leadership, with faculty and ultimately with their students.

“These are the conversations, and for students, they’re not going to remember so much of the minutiae of our discipline, but ultimately they’re going to remember where the pieces came together! So I just want to really encourage teachers to be the piece-makers, and I don’t mean, peacemakers, that’s nice too, I mean to be the place where these pieces really come together. Hopefully, the teachers reading this are teachers who are interested in the importance of social emotional learning and equity. This is that moment!”

The clock is ticking. It is time to teach about racism.

Announcing the Coalition for School Well-Being